Arkon is a chess iOS app designed to explore opening lines and their strength in real-time. Arkon has an embedded grandmaster database with historical games for players with a 2500+ ELO rating. It also ranks the strength of openings you discover with Stockfish — which is currently the strongest chess engine.

On the left we have the initial position of chess. Arkon allows for exploration of any opening such as the Sicilian line shown on the right. Below is documentation of different portions of the screen.

1. Move: Every possible move that is legal is listed. There are two ways to make the next move in a line: by selecting a row in the table or by dragging a piece on the board.

2. Engine Score: This is Stockfish’s strength rating for a move. The score is in centipawns which is 1/100 of a pawn. A positive score means the current player to move (see 4. Turn Indicator) is in a favorable position. Conversely, a negative score means the current player is behind. For example, if it is black’s turn, an engine score of -100 (cp) means black is behind by the equivalent of 1 pawn piece. Note that this may not mean white has literally captured a pawn. Even if no pieces have been captured, with a score of -100 centipawns, Stockfish is certain the current side is significantly behind.

4. Turn Indicator: The carrot between the white/black king icons indicates which side’s turn it currently is. In both of the examples above, it is white’s turn to move.

6. Game Info: When a move is encountered that has been played only once in grandmaster play, that is GM Games is 1, information about the game is listed here. For example, the following Game Info is shown for Bd3 in the Sicilian line in the figure above.

7. Processing Icon: When a new line is selected, Stockfish may need time to calculate the scores of positions that have not been explored before. While this is occurring, the processing icon is displayed.

8. Reset: The reset button restores the board to the initial position of chess.

9. Back: The back button returns the board to the previous move in the line.

10. Email PGN: Opens the iOS email compose dialog with the game PGN in the email body. The device must have an email account setup properly for the Email PGN feature to function as expected.

It is common for an adept chess player to have at least a few openings they are familiar with and at high levels of chess, grandmasters often have an opening repertoire. Traditionally, learning openings has consisted of memorizing common lines; however, what happens when a position is discovered in play that is not in an opening book? Also, what if there is a desire to play aggressive chess openings?

This is where analysis with Arkon is extremely useful. Stockfish which is what is embedded in Arkon, can evaluate/score positions in centipawns (1/100 of a pawn). For instance, let’s look at the Scotch Game opening repopularized in grandmaster play by Garry Kasperov:

It’s black’s turn and the classic next move in the Scotch is to take the pawn on d4. This is confirmed above by grandmaster statistics where exd4 has been played 1,882 times. It is also confirmed by the engine which considers exd4 the best move which will leave black behind by only -17 centipawns. Although black is slightly behind, this is the common condition at the beginning of chess. Black begins every game of chess behind by a fraction of a pawn according to chess engines.

However, what if our opponent does not play according to the expected lines for this opening? For instance, let’s assume we are white and black then plays d5:

We are now “out of book” meaning we are in a position that is highly unlikely to be something found in opening chess literature. There are no grandmasters that have tried this line in competitive play. This is where Arkon can be incredibly insightful. As we can see, the engine finds us a very strong move of Nxe5 in this largely unexplored new position which puts white ahead by almost an entire pawn (72 centipawns).

So in this way, we can better understand what to do in the case of unexpected and undocumented lines for an opening.

What can be even more exciting is exploring new opening lines that reach “out of book” territory quickly and leave us in a strong position according to the engine. The reason this is exciting is because it can completely disrupt an opponent’s opening knowledge, but leave us in familiar territory. Let’s look at a more unusual opening with Arkon: 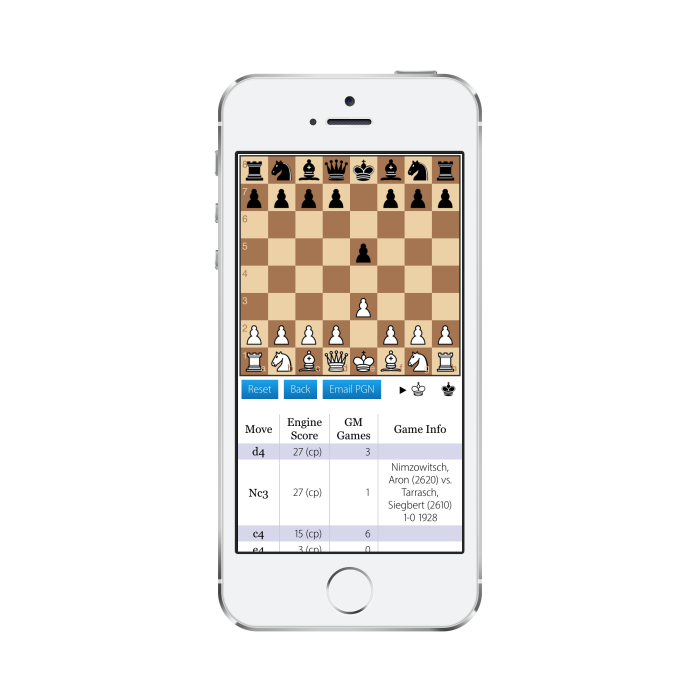 White starts with e3 which is likely a complete surprise to black. e5 is a natural response, but as we can see white is in perfectly strong territory with d4 evaluated as 27 centipawns ahead in the game. This obscure opening does have a name in opening literature — it’s called the Van’t Kruijs opening — but it is virtually unplayed and undeveloped. There are 3 grandmaster games recorded after d4, but we are for all intents and purposes out of book with an advantage and our opponent is “flying blind” as Magnus Carlsen often says.

We hope Arkon brings greater joy and wisdom to your play!